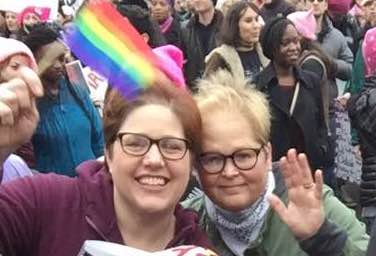 A guest post by Ryna May, Professor of English at Howard Community College:

October is LGBTQ History Month.  When I think about LGBTQ history, I am of two minds and the poems included in the LGBTQ collection on Poets.org perfectly reflect that split.  Some of the poems are so absolutely ordinary in their subjects, like the poem, “our happiness” by Eileen Miles, and on one hand, I think, that’s progress: the lives of LGBTQ people are written and expressed in the same way as other lives.  That’s equality, right? Being a gay poet doesn’t mean that you have to write every poem about the experience of being gay.

But if we’re really talking about history, the conversation is incomplete unless we acknowledge that nothing is really the same.  Some might say, hey, you won the right to get married, so what are you complaining about?  That reminds me of the poem, “On Marriage” by Marilyn Hacker (1942) where the poet talks about the way in which LGBTQ people “must choose, and choose, and choose / momently, daily” to affirm their commitment to one another, “Call it anything we want” when society doesn’t quite know how to accept or handle this kind of “covenant.”

We talk a lot about “White Privilege” in cultural discourse, but we don’t talk a lot about “Mainstream Heterosexual Cisgender Privilege.”  It exists.  MHCP allows folks to do very ordinary things like hold hands in public without having to do a quick check of their surroundings.  Put it this way: there are times when showing affection to my wife in public – just a peck on the cheek – feels like a dangerous political act.

If we’re talking about history, we have to acknowledge that being an LGBTQ person is a unique and still unequal experience in this country.  There are subtle and unsubtle ways that society is set up to exclude and marginalize us.  And some of the poems I browsed on Poets.org do address that fact. I find myself drawn more powerfully to these poems because I do want to acknowledge the difference that exits.  A great example of this is “A Woman Is Talking to Death” by Judy Grahn.  The poem was written in 1940, and the lines that jump out to me are:

this woman is a lesbian, be careful.

When I was arrested and being thrown out

of the military, the order went out: don’t anybody

speak to this woman, and for those three

long months, almost nobody did: the dayroom, when

I entered it, fell silent til I had gone; they

were afraid, they knew the wind would blow

them over the rail, the cops would come,

the water would run into their lungs.

was spoiled. They were my lovers, those

women, but nobody had taught us how to swim.

when I signed the confession of what we

No one will ever speak to me again.

A friend of mine, Rob, hid the fact that he was gay the entire time he was in the Navy – it wasn’t just that he feared for his job, he also feared for his life, that other soldiers might threaten or harass him for being openly gay.  He hid it until he completed his tour of duty, and then he came out to all of his friends.  You might think that passing a law abolishing “Don’t Ask, Don’t Tell” would end this discrimination, but you would be wrong.  This discrimination still exists in the military – though now the target has shifted from being gay or lesbian to being transgender.  Grahn’s poem was written in 1940; it is 77 years later, and we are not there yet. And because we live in the age of vindictive executive orders, we are too afraid that the next step in the movement will be a step backward.

If we’re talking about history, we have to acknowledge that we’re still in the middle of the story right now.   What started with Alan Turing, Barbara Gittings, Christine Jorgenson, Alan Ginsberg, Walt Whitman, the Stonewall riots, James Baldwin, and Harvey Milk has led us to the defeat of DOMA, Proposition 8, the victory of Edith Windsor, the success of Tammy Baldwin. But this complicated history also continues with events like the shooting in the Pulse nightclub and pronouncements that threaten the rights of transgender soldiers and that reinterpret Civil Rights laws to exclude protections for LGBTQ employees.  Current events are going to write these poems, and I want to read those poems too, not just the ones that try to normalize our experience.

One of the happiest days in my life was November 6th, 2012.  That was the day that voters in my home state of Maryland affirmed the right of gay and lesbian couples to marry, and I knew that I would marry my wife.  Then, on June 26th, 2015, the United States Supreme Court ruled that we should be seen as equal under the law.  In a stunning closing paragraph, Justice Anthony Kennedy wrote, “Their hope is not to be condemned to live in loneliness, excluded from one of civilization’s oldest institutions.  They ask for equal dignity in the eyes of the law.  The Constitution grants them that right.” To read that, you’d think that we are living in a new era, but in reality, it isn’t quite true.

In “Love Song for Love Songs,” Rafael Campo writes that it is “A golden age of love songs and we still / can’t get it right.”  That’s what I think: If we’re going to talk about LGBTQ history and celebrate equality, we have to admit that, despite so much progress in the last few years, the last ten months have shown us that we still have so far to go. Sharpen your pencils – there is so much more to come.

By Laura Yoo in Uncategorized on October 25, 2017.
← what are libraries for? Mike McCormack to read at HoCoPoLitSo’s 40th Irish Evening of Music and Poetry →