“Up Close and Personal” at the Recent Blackbird Poetry Festival 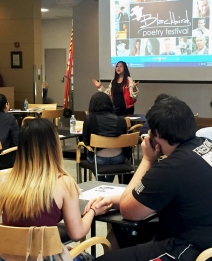 HoCoPoLitSo’s own versions of “Up Close and Personal” are the workshops that acclaimed writers offer aspiring writers. During the 2018 Blackbird Poetry Festival, featured poets Marilyn Chin and Joseph Ross read their work during the afternoon and evening. But on the morning of April 26, Ross and Chin offered forty students a close-up version of writing and reading poetry.

Students from Howard Community College’s creative writing and English courses were assigned some of Chin’s poetry to read, and she brought those poems to life, reciting and reading works like “How I Got That Name,” in which she explains how her father repurposed her Chinese name, Mei Ling, to become Marilyn. As a dark brown Chinese child, she wasn’t beautiful and wasn’t honored, Chin explained to the students. 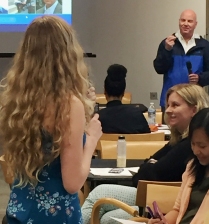 “I’m this little Chinese girl, born dark, underweight, a little weak. How shall I speak? I shall speak loudly,” Chin said. “I shall speak for that little brown girl who was unwanted.”

Chin and the students also talked about “loaded words,” like “slant” and “bitch,” and how Chin wants to repurpose those words and take the power away from the negativity that bigots have used.

“You can take the power back,” Chin promised.

When Joseph Ross claimed the microphone, he turned the tables and asked the students to write. “Every poem is political,” Ross said, because as Langston Hughes wrote, “Poets who write mostly about love, roses and moonlight, sunsets and snow, must lead a very quiet life.” Whether you choose to write about sunsets or sexual assault, snow or police brutality, those are political choices, he explained. 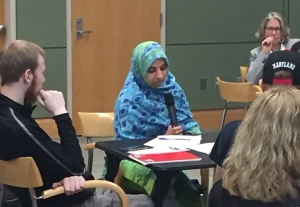 Then he asked students to write ten to fifteen-line poems including these phrases: line from a song, a phrase someone might hear on public transportation, words someone might speak in a kitchen, and title of a favorite book or poem or movie. 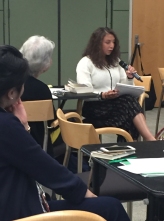 Sofia Barrios, who also read a powerful political poem during the afternoon reading, wrote a poem that logically incorporated the line, “Next stop, Glenmont.”

The next assignment Ross suggested was to write an apology that the author wanted to hear. One student wrote the apology her father should give to her. Another wrote an apology to his inner self that included the sentiment that he was sorry he didn’t believe in himself more.

After the workshop, Chin listened to one student’s story. Chunlian Valchar told 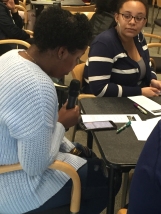 Chin that as a baby girl born with a birth defect in China, her birth parents left her by the side of the road near the market. Valchar’s adoptive family wanted her, though, so Valchar said her situation was slightly different from Chin’s, but she still identified strongly with Chin’s work.

Chin enfolded Valchar in a hug, they took a photo and Chin left her with a simple thought: “You’re loved and cherished.”

Afterward, Valchar explained that she’s not really angry at her birth parents, since she doesn’t really know what they were going through. But she liked Chin’s poetry.

Up close and personal indeed.

By hocopolitso in Blackbird Poetry Festival on May 29, 2018.
← Boys’ Book Club: How these five third graders roll Power of Poetry – a guest post by Hiram Larew →