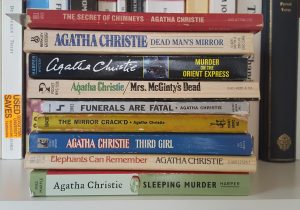 During my last visit to Antique Depot in Old Ellicott City (if you’ve been reading this blog, you know I LOVE this place), I picked up several paperback copies of Agatha Christie’s mysteries.

My memories of reading Agatha Christie are also memories of growing up. On my parents’ bookshelves, I found Korean novels, histories, and poetry.  But also there were the classics like Dostoevsky and Don Quixote as well as detective novels by Agatha Christie and thrillers by Sidney Sheldon.  All in Korean.  In middle school, I read my first Christie, And Then There Were None, in Korean.

So it was with a bit of nostalgia that I began reading The Secret of Chimneys, one of my finds at Antique Depot.  Right away I noticed in her writing something dramatically different from the mystery novels of today. Novels like Girl on the Train and Gone Girl which were wildly popular recently (and made into movies) have character development (some better than others) and complicated plot twists, a mix of whodunit and exploration of various themes. Compared to these, Christie’s mystery seemed rather… plain.  Instead of sex, drugs, infidelity, violence, and blood, we find witty dialogue and a slow building of a puzzle. 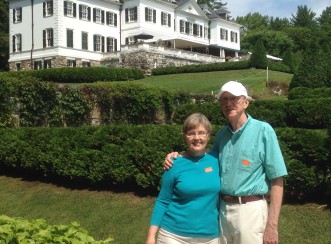 Jean Sonntag with her husband Bill at Edith Wharton’s home, The Mount, in the Berkshires.

This re-introduction to Christie made me want to learn more about the mystery genre, so I turned to my friend Jean Sonntag with some questions. Jean is an adjunct instructor of English at Howard Community College as well as a mystery enthusiast.  Here’s what she had to say about Christie and the development of the mystery genre.

Jean: There is a huge difference. The key thing is the emphasis in Christie on solving a puzzle to the subordination of characterization, psychological analysis, or any larger themes.  Christie was part of a group called The Detection Club who had a quite elaborate set of rules for writers of detective stories in the 30’s. In short, everything should be there so the reader could solve the puzzle. Writers, of course, violated these rules at times. The tradition of ratiocination (Poe’s word) and very often an eccentric detective were part of the development of this 30’s Golden Age and Christie fits this tradition, particularly with Hercule Poirot.

Today’s detective story leaves room for more in-depth characterization and is minus the formulaic considerations of the detective stories of Christie’s era.  Thus, someone like Elizabeth George’s Inspector Thomas Lynley and P.D. James’ Adam Dalgleish have a history that unfolds throughout the works while they are solving crimes committed by complex characters in complex situations. The modern detective story tends to be longer, more in depth, with more sophisticated style in many cases.  And some have themes; P.D. James has pointed out that she sets out to write a detective story as any one would a novel, where the plot is a natural outgrowth of plot and setting.

Laura: Beyond the experience of thrill or curiosity, what do you think draws people to mysteries like Christie’s?

Jean: Reading Christie is a thinking (not feeling) exercise.  Her works are not exceptionally long and her style is relatively simple, with pretty good dialogue.  Those attracted to puzzle solving or who are reading strictly for entertainment love her.  All of us have times we’d like to read like that – consider that layover in an airport or the need for pure escape. Interestingly enough, many of my friends who are Christie fans cut their teeth on her as middle or high schoolers.  I came to Christie late, so the meatier mystery appeals more to me unless I need that strictly lighter entertainment option.

In addition, Christie and the other Golden Age writers got their start between the two world wars.  I think this really supported their popularity as it was a time when readers badly needed stories where everything was tied up neatly at the end.  Even today, one school of thought says we read mysteries because we like to have that sense of closure.  More modern detective or crime novels sometimes leave us with more modern senses of ambiguity or disquiet, but I still think the solving of the crime still meets that need today.

Laura: What are your thoughts on Agatha Christie? How would you describe her influence in the mystery genre?

Jean: Although Christie is part of that rational puzzle approach to the mystery, she has had incredible success for a variety of reasons.  One is the sheer number of works she produced – over 80 detective (or thriller) novels, and over 90 novels total over a 50-year career.  The second is the fact that she escapes a bit of the label of formula fiction because of the variety of her detectives, the ingeniousness of her puzzles and the variety in settings.  The relative simplicity of her style also made it easier to translate her works into other languages. At one point, she was second to the Bible in the number of languages in which her books have appeared.

Laura: Is there a writer writing now (or recently) that you’d compare to Christie?

Jean: Someone more expert than I might have a candidate for this comparison.  I don’t think there is anyone who compares because the nature of the detective story has changed so much, and because I doubt anyone will come close to her huge output.

I do see influences, however.  One is what we now call the “cozy mystery” – a set of writers who minimize the goriness of the crime and focus more heavily on solving the mystery but also provide more character development.  Someone once said that in Agatha Christie, the representation of the crime itself is nothing more than a bloodstain left on the floor, so the cozies are in this tradition.

The other influence is the tradition brought to perfection in Miss Marple, a detective whom no one suspects of being involved and therefore one who can pick up clues where others couldn’t.  This sort of detective, always an amateur, is also usually a feature of the cozy mystery.  One of my favorites that fits this bill is Alan Bradley’s series (The Sweetness at the Bottom of the Pie is the first one) with a precocious child detective Flavia de Luce.  No one suspects her as she solves crimes.

Jean calls herself an enthusiast rather than an expert, but certainly I learned a great deal from this crash course in mystery. I think my reading of Christie and other detective novels, crime novels, mysteries, and thrillers will be a bit richer for it.  Jean is hoping to teach a continuing education course on the topic sometime in the near future, and I bet the mystery enthusiasts of Howard County will thoroughly enjoy it.