The Howard County Poetry and Literature Society, HoCoPoLitSo, will launch its poetry anthology, Twenty Years, Twenty Poets, Volume II, in honor of its 40th anniversary, at a reception on Friday, January 23, from 6 to 8 p.m. at the Howard County Center for the Arts. The launch will be held in conjunction with the Howard County Arts Council and Howard County Tourism opening of two exhibits, Ho Co Open 2015 and Poetic Energetic. The reception will feature a poetry reading, live music and light refreshments and is free and open to the public. Snow date: Friday, January 30. For more information about the event visit: http://bit.ly/1t2ETim 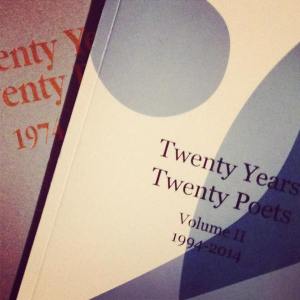 The Howard County Poetry & Literature Society (HoCoPoLitSo) has been producing live literary events for the community since 1974. Twenty Years, Twenty Poets, Volume II contains a selection of poetry from the variety of writers who have visited Howard County between 1994 and 2014, from the world-renowned Paula Meehan to the nationally acclaimed Mark Strand and Rita Dove. Distinguished authors such as Patricia Smith, Edward Hirsch, Mary Oliver and E. Ethelbert Miller have inscribed their words on the hearts of many Howard County residents; their poems are HoCoPoLitSo’s history, detailed in Twenty Years, Twenty Poets, Volume II. For more information, call HoCoPoLitSo at (443) 518-4568 or email hocopolitso@yahoo.com.

Joining us and reading will be contributor E. Ethelbert Miller. A frequent HoCoPoLitSo guest E. Ethelbert Miller is a writer and literary activist. Miller is the founder and former chair of the Humanities Council of Washington, D.C. He served as a Commissioner for the D.C. Commission on the Arts and Humanities from 1997-2008. He is board emeritus for the PEN/ Faulkner Foundation.

The author of several collections of poetry, he has written two memoirs, Fathering Words: The Making of An African American Writer (2000) and The 5th Inning (2009). Fathering Words was selected by the D.C. Public Library for its DC WE READ, one book, one city program in 2003. His poetry anthology In Search of Color Everywhere was awarded the PEN Oakland Josephine Miles Award in 1994.

HoCoPoLitSo is a nonprofit organization designed to enlarge the audience for contemporary poetry and literature and celebrate culturally diverse literary heritages. Founded in 1974 by National Book Award finalist Ellen Conroy Kennedy, HoCoPoLitSo accomplishes its mission by sponsoring readings with critically acclaimed writers; literary workshops; programs for students; and The Writing Life, a writer-to-writer interview show seen on YouTube, HCC-TV, and other local stations. HoCoPoLitSo receives funding from the Maryland State Arts Council, an agency funded by the state of Maryland and the National Endowment for the Arts; Howard County Arts Council through a grant from Howard County government; The Columbia Film Society; Community Foundation of Howard County; the Jim and Patty Rouse Charitable Foundation; and individual contributors.

By timsingleton in Event, In Partnership on January 12, 2015.
← Poetry for the Young (and the Young-hearted). 37th Annual Irish Evening w/Emma Donoghue, Narrowbacks, Step Dancing on Feb. 6th →