[a guest blog by poet Linda Dove written for HoCoPoLitSo]

Stanley Plumly died on April 11, 2019, in the most poetic month of the year. He was a poet’s poet and a teacher’s teacher. He authored ten volumes of poetry and four works of nonfiction, several of them award-winners, including a finalist for the National Book Award. He read for HoCoPoLitSo audiences twice – once in 1988 and once in 2010, and served as the Poet Laureate for the state of Maryland for most of the past decade. Since 1985, Plumly taught at the University of Maryland College Park, where he founded the MFA program and mentored students in poetics for more than 30 years. 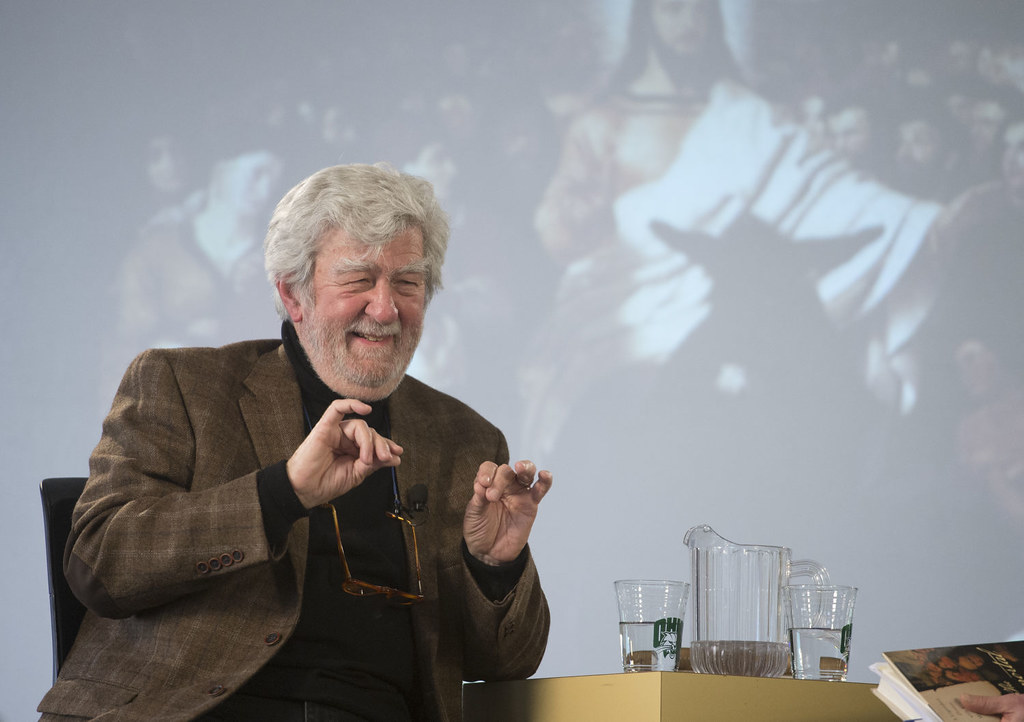 In the fall of 1990, I took a poetry workshop with him at UMCP, where I was—at the time—pursuing a master’s degree in American literature. I was not a poet—instead, I was training to be a scholar of other people’s poetry. But I knew the chance to study with Stan Plumly was not something you passed up, and I, somewhat timidly, filed into the light-filled room every week. It would be years before I would produce a poem that I’d consider good enough to submit to a journal, but I soaked in the lessons nonetheless. For instance, when Stan praised a poem written by a classmate that was an ode to a woman’s areola, it reinforced for me that nothing was off-limits in poetry. Nightingales and Grecian urns might seem more the stuff of poetry, but they were only one means to one end—although, as odes go, those of John Keats were a pretty good bet for what Stan might consider great writing.

In fact, last week, a new poem by the young, celebrated poet Kaveh Akbar, “The Palace,” appeared in The New Yorker and made its lightning-fast rounds on Twitter. When I read the poem, I had the immediate thought, I wonder what Stan Plumly would say about this?, as Akbar imagines the voice of Keats into being (“Hello, this is Keats speaking”). Keats was Stan’s self-described poet-hero, a figure he wrote about extensively in prose, including in his much-praised book, Posthumous Keats:

Keats’s best-known doctrine, Negative Capability, implies an engagement in the actual through imaginative identification that is simultaneously a kind of transcendence. The artist loses the Selfhood that demands a single perspective or “meaning,” identifies with the experience of his/her object, and lets that experience speak itself through him/her. Both the conscious soul and the world are transformed by a dynamic openness to each other.

What’s striking about Stan’s interpretation of the famous Keatsian concept here is his focus on humility—“The artist loses the Selfhood”—that also happened to define Stan as a person. He was warm and generous and down-to-earth, even as he was revered. As one of my fellow graduate students, Renée Curry, recently remembered, “Stan was always ‘present.’ As a teacher, he made us look at the deepest meanings of words, at how they could create fire in a poem. As a reader of our poems, he was always kind, yet firm in what our creations needed in order to grow. . . I am so happy to have spent five years as his student.”

Yet, despite how very human he was, he also commanded the spaces he moved through. As another one of Stan’s students, Valerie Macys, commented, “the room shook just a bit whenever he walked inside.” In fact, she reminded those of us who gathered on Facebook to mourn his passing of how charismatic he was, how he had that special sort of aura about him, despite his modest mannerisms: “do you remember his cowboy boots and his jean jacket? He used to come into the building like he rode in on a stallion.” Or her memory of yet another graduate student, Tim Skeen, on his way to meet Stan in his office hours, who remarked, “‘It’s time to prostrate myself before the Oracle’.” Stan Plumly was larger than life, even as he was unassuming. To paraphrase his own poem, “Wight”—he embodied the verb “to be”:

Is is the verb of being, I the noun—

or pronoun for the purists of being.

I was, I am, I looked within and saw

nothing very clearly: purest being.

Of course, most of Stan’s oracular charm existed because of the poetry itself. The words “amazing,” “stunning,” full of “wonder,” “extraordinary,” and “genius” are all superlatives I’ve seen other poets apply to his work in the wake of his death. He made my own poems more responsive to that finer layer of the world, the one you notice only if you’re not taking it for granted. He shared that observant posture with the British Romantic poets he so loved, as well as an attention to a life lived through emotion. Writing about that all-too-common subject of heartbreak, Stan makes it sing:

Love, too, a leveler, a dying all its own,

the parts left behind not to be replaced,

a loss ongoing, and every day increased,

to watch the snow or the dead leaf fall,

the rings around the streetlight in the rain,

and then the rain, the red fist in the heart

opening and closing almost without me.

Note the way that he makes the whole notion of lost love hinge on the word “almost.”

Poets are keenly aware that words outlive them. In Stan’s case, he left us with models of perfect pitch, imagery, and line. In “Ground Birds in Open Country,” he admits to letting the birds, the poems, go for us, anytime we might encounter his work in the future:

And in a hallway once,

the hollow echo length of a building.

I picked it up closed inside my hand.

I picked it up and tried to let it go.

They fly up so quickly in front of you,

without names, in the slurred shapes of wings.

Scatter as if shot from twelve-gauge guns.

Or they fly from room to room, from memory

past the future, having already gathered

in great numbers on the ground.

Another one of Stan’s students, Laura Dickinson, summed up his influence this way: “He made me a better poet. I can say nothing that is more significant about his impact on me than that,” to which Jeanne Griggs then added, “I think he also made me a better person, more conscious of things I’d overlooked before he insisted I look.” Truly, there can be no greater epitaph.

Linda Dove grew up in Howard County and holds a Ph.D. in Renaissance literature from the University of Maryland. She teaches college writing and is an award-winning poet; her books include In Defense of Objects (2009), O Dear Deer, (2011), This Too (2017), Fearn (2019), and the scholarly collection of essays, Women, Writing, and the Reproduction of Culture in Tudor and Stuart Britain (2000). She lives with her human family, two Jack Russell terriers, and three backyard chickens in the foothills east of Los Angeles, where she serves as the faculty editor of MORIA Literary Magazine at Woodbury University.

By Laura Yoo in Uncategorized on April 29, 2019.
← Teen Open Mic in Columbia Beth Ann Fennelly: It’s all about the mouth →